How to Dress as a Pioneer Man (Or Boy) 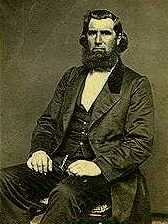 For a printable PDF of this article, click How to Dress as a Pioneer Man or Boy .

Dressing a young man (age 12 or up) is so similar to dressing an adult man, we’ll cover them together in one article. Most of the layers will be familiar; men’s clothing hasn’t changed a great deal in 160 years!

This article is only the briefest overview; within any 5 year span of the pioneer era, there are many, many style and use details for all classes of people. Head on-line to ClothingTheSaints.com for links to some great on-line picture archives; seeing the real people in their real clothing is a tremendous help to many.

Underclothing
The layer closest to the skin includes a shirt (or undershirt) and drawers; in cold weather, these may be made in soft, lightweight wool flannel, or sometimes cotton flannel. Red wool is one popular option; the color may not actually add warmth, but it certainly feels cheerful!

Drawers are cut similarly to trousers, and hemmed around the knees, or fully to the ankle. Drawers are also fairly optional in the era; they will reduce leg chafing when you walk. Stockings or socks can be wool or cotton; homemade socks were generally knit of very fine wool in natural colors or white.

Shirt
The basic men’s shirt of the mid-century is undergoing a transition, from a very full, loose garment in the “underwear” category, to a more fitted (but still very generous) garment. Self-fabric standing collars, similar to modern dress shirt collars, are common; when a band collar is used, a detachable, starched collar is also typically worn. 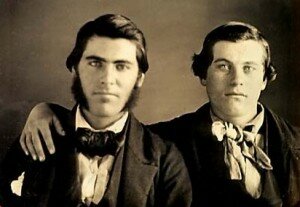 Shirts generally button partially down the chest with small, white china buttons, have a dropped shoulder, and long, full sleeves with a buttoning cuff at the wrist. They are cut long, and meant to be tucked into the trousers; this extra length can act as “drawers.” White cotton and linen are common fabrics for a shirt; for working wear, printed and patterned shirts can also be used. 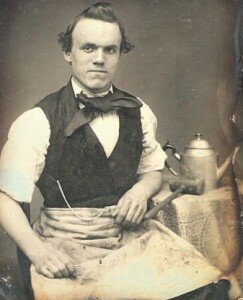 Trousers, Vests & Coats
Wool is the most common fabric for coats, vests, and trousers. Look for wools that are the same weight or only slightly more robust than a modern wool tweed suit.

The biggest difference between the suit a very wealthy man and a working man wears is quality of fabric, with exactness of fit a close second. The basic styles are very similar across all economic levels.

Plain wool, tweed, even small plaids (for trousers in the later 1840s and early 1850s) are all acceptable; vests may match or contrast. 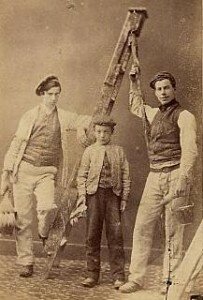 Vests and coats are typically fairly fitted through the upper torso, but if your coat or vest is too large, that’s fine, too! Not everyone was able to achieve the ideal fit. Young men needing the longest wearing time from their clothing can plan things a bit large, with grow-into-it room.

Vests often use the main fabric for the fronts, and a single layer of glazed cotton, linen, or silk for the back, which reduces bulk and weight.

Coats from the 1840-1860 era might be cut in the “frock” style, with a seam at the waistline and long (nearly knee length) skirts; or might be cut in a “paletot” style (pronounced PAL-ih-toe), which doesn’t have the waist seam, but is cut just as long as a frock. 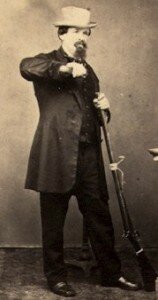 Another style, the “sack” coat, is a looser, shorter cut, more similar to a modern suit coat. It was considered a less-formal coat, one that a working man might wear, as it required far less tailoring and could be made more easily at home.

A man might remove his vest and coat if engaged in heavy physical labor; he would not be likely to go bare-chested during work, or to conduct spiritual business or formal social situations in his shirtsleeves.

Trousers are worn at or just above the actual waist level (which is located at the lower edge of your lowest floating ribs), with a button-fly.

Fashionable trouser legs in the 1840s could be quite slim; working class trousers, and the trousers of the 1850s and 1860s are more loose-fitting through the leg; all are worn without a crease down the front, and hemmed about the top of the foot (in other words, short enough to prevent walking on the hems.)

Head & Toe
Sturdy leather boots, lacing up the front of the foot, are the footwear of choice for the westward migration. Black and brown leather are both common.

As with coats and vests, men’s hats are both protection and personal style; hats range from tall silk top hats to rough straw hats, and many styles in between.

Caps, similar to golf or “newsboy” caps, are an option for men young and old. 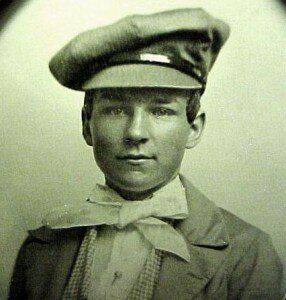 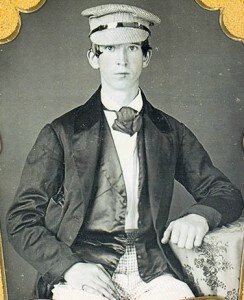 Facial Hair
Beards and mustaches are common in the mid-19th century, and can be worn by anyone old enough to produce one. But, many, many hair and facial hair styles will be appropriate, including a clean-shaved face and short hair. 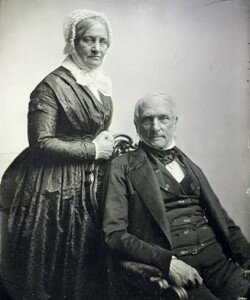 In general, hair longer than the shirt collar is rare on men of any age in the period. Side parts are common, as are “brushed back” styles and small pompadour styles (as in the famous image of Joseph Smith.) Bangs worn down on the forehead are less common. 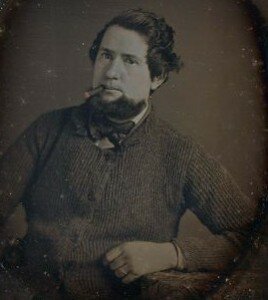 Posted in For Gents

Powered by WordPress and created by the Code Monkeys at ESC Publishing.