It can be tempting to imagine that the early Latter-day Saints were entirely set apart from the rest of the world, that the peculiarities of their faith were manifest in every aspect of life. But that’s not necessarily the way it works!

When it comes to physical appearance, early Latter-day Saints looked pretty much like everyone else! Their clothing may feel peculiar and unusual to us, but that’s mostly because we’re looking at an unfamiliar system, very different from our own.

Here’s a quick look at some mid-century citizens, both LDS and non-LDS. Can you Spot the Saints? 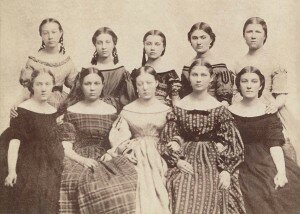 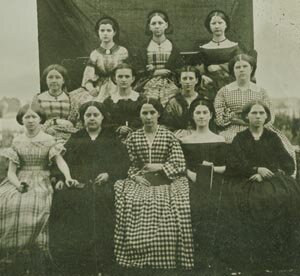 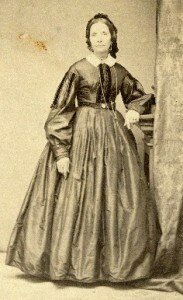 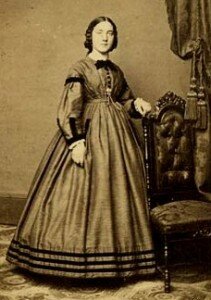 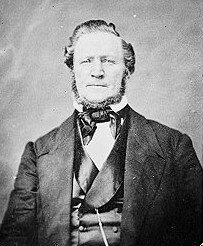 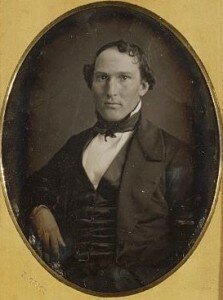 Click through the jump to find out the answers!

The teen girls in group A are Brigham Young’s ten teenage daughters in the 1850s (image in the BYU archives). Group B is a similarly-aged set from the Wesleyan Female Institute in 1854. There are no distinct differences in these groups of girls; they are all dressed tastefully and modestly for young women in the 1850s.

The two women are both stylishly dressed in silk dresses with “coat” sleeves, their skirts supported by fashionable hoops. They are tastefully accessorized and very tidy. Woman A is Eliza Snow (definitely LDS!) in the mid-1860s; Woman B is an unnamed woman from Pennsylvania, from roughly the same year. Again, there is no stylistic difference; both women appear to be comfortably middle class and tastefully stylish.

If you’re familiar with early LDS leaders, you probably recognized Gentleman A as Brigham Young during the 1850s. Gentleman B is also from the 1850s (and the Library of Congress image archive). Both men sport finely-cut wool frock coats, silk waistcoats and cravats, and snowy white shirts… trying to determine who is LDS, and who is not, strictly from clothing cues, would be impossible.

We’ll share more Spot the Saints posts in the future… check back soon!

One Response to Spot the Saints

Powered by WordPress and created by the Code Monkeys at ESC Publishing.